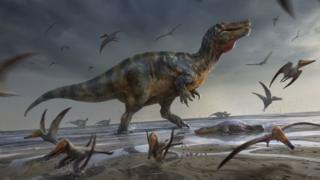 Scientists have found bones belonging to what could be Europe’s largest ever land-based dinosaur in the UK.

The remains of the two-legged, crocodile-faced spinosaurid dinosaur were found on the Isle of Wight.

The dino lived 125 million years ago and would have measured more than 10 metres long, with sharp teeth and claws and a long tail.

Experts say it was so ferocious it would have been able to bite other dinosaurs in two! 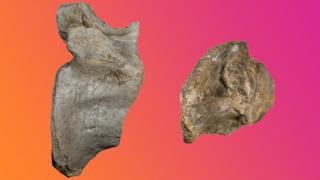 The tail and pelvis bones from spinosaurid

Scientists have analysed the bones and say the dinosaur would have lived in lagoonal waters and sandflat areas looking for food.

Researcher Chris Barker said: “This was a huge animal, exceeding 10m (32.8ft) in length and probably several tonnes in weight.

“Judging from some of the dimensions, it appears to represent one of the largest predatory dinosaur ever found in Europe – maybe even the biggest yet known.”

Only a few bones were discovered, but it shows that the dinosaur would have been a huge creature.

The remains found include a huge pelvic and tail vertebrae – the bones that make up the spine. 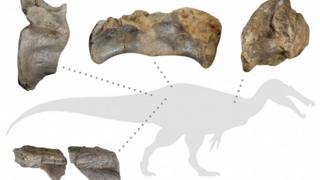 This shows how the bones would have been positioned on the spinosaurid’s giant body.

Scientists are excited by this new discovery which tells them more about the spinosaurid dino.

“We hope that additional remains will turn up in time.”

The team also discovered marks on the bones, including little tunnels, which they think show that the body of the dinosaur would have been picked at by scavengers after it died.

Co-author Jeremy Lockwood said: “We think they were caused by bone eating larvae of a type of scavenging beetle.

“It’s an interesting thought that this giant killer wound up becoming a meal for a host of insects.”

The bones are now on display in the Dinosaur Isle Museum in Sandown, Isle of Wight.