As Russian bombs have rained down on Ukrainian cities, the citizens of Kharkiv and Kyiv have crowded into air raid shelters and bunkers not used since World War II. During the worst days of Russian bombardment in Odesa, a bunker housed a makeshift children’s hospital. And in Mariupol, a large complex beneath the Azovstal steel plant sustained the city’s last enclave of Ukrainian resistance.

Images of Ukrainians in these close, subterranean quarters have forced a stark awakening for many in Europe. Since the end of the Cold War, the threat of aerial bombardment on the continent has never felt so close. At the same time, the bunker infrastructure built up over a half-century of war to withstand attacks has, in many countries, never been so neglected.

“In the Western world, we were just so infatuated with the way the Cold War ended, mostly peacefully,” said Rosanna Farboel, a Cold War historian at Denmark’s Aarhus University. “We have just realized that we were really naive.” 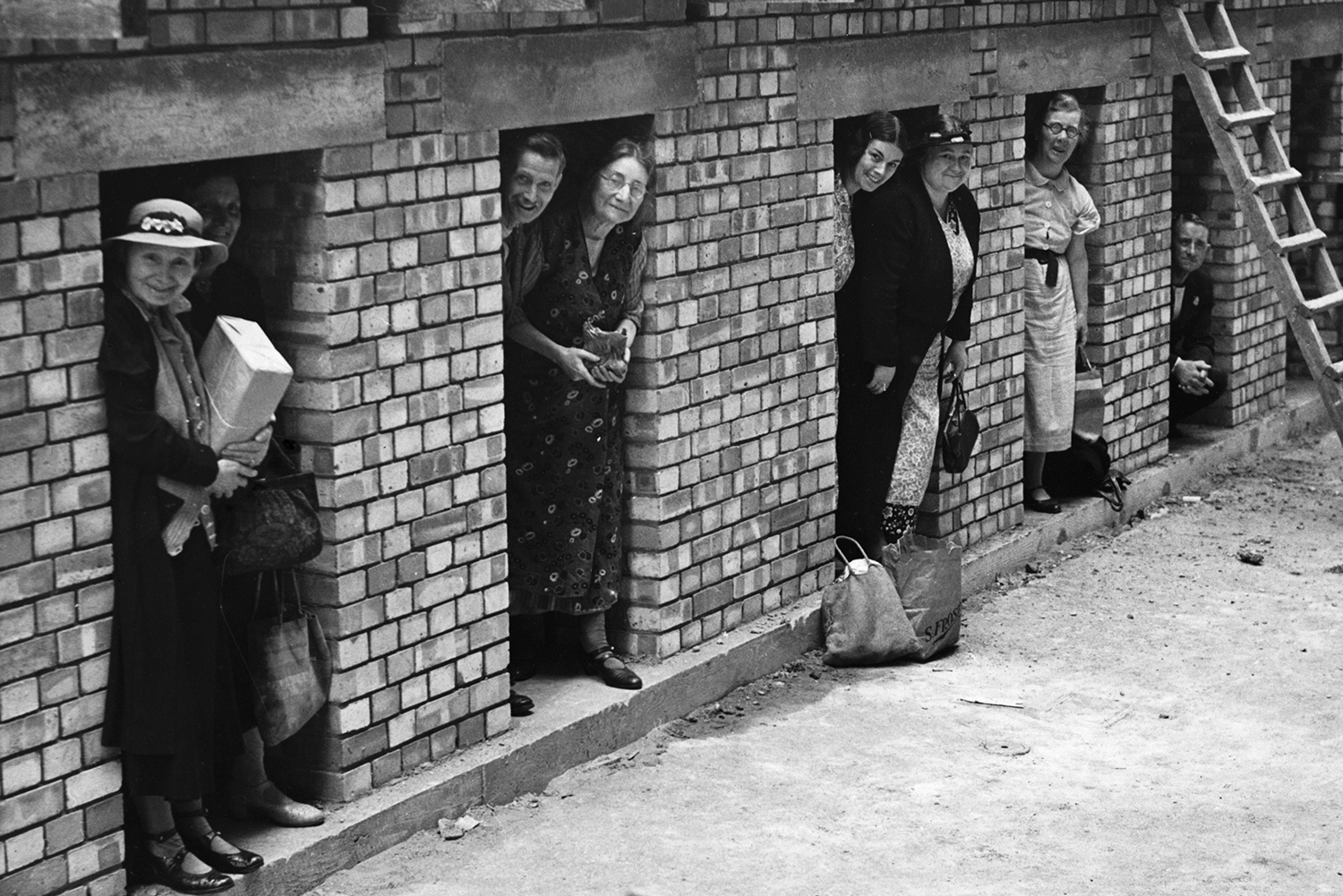 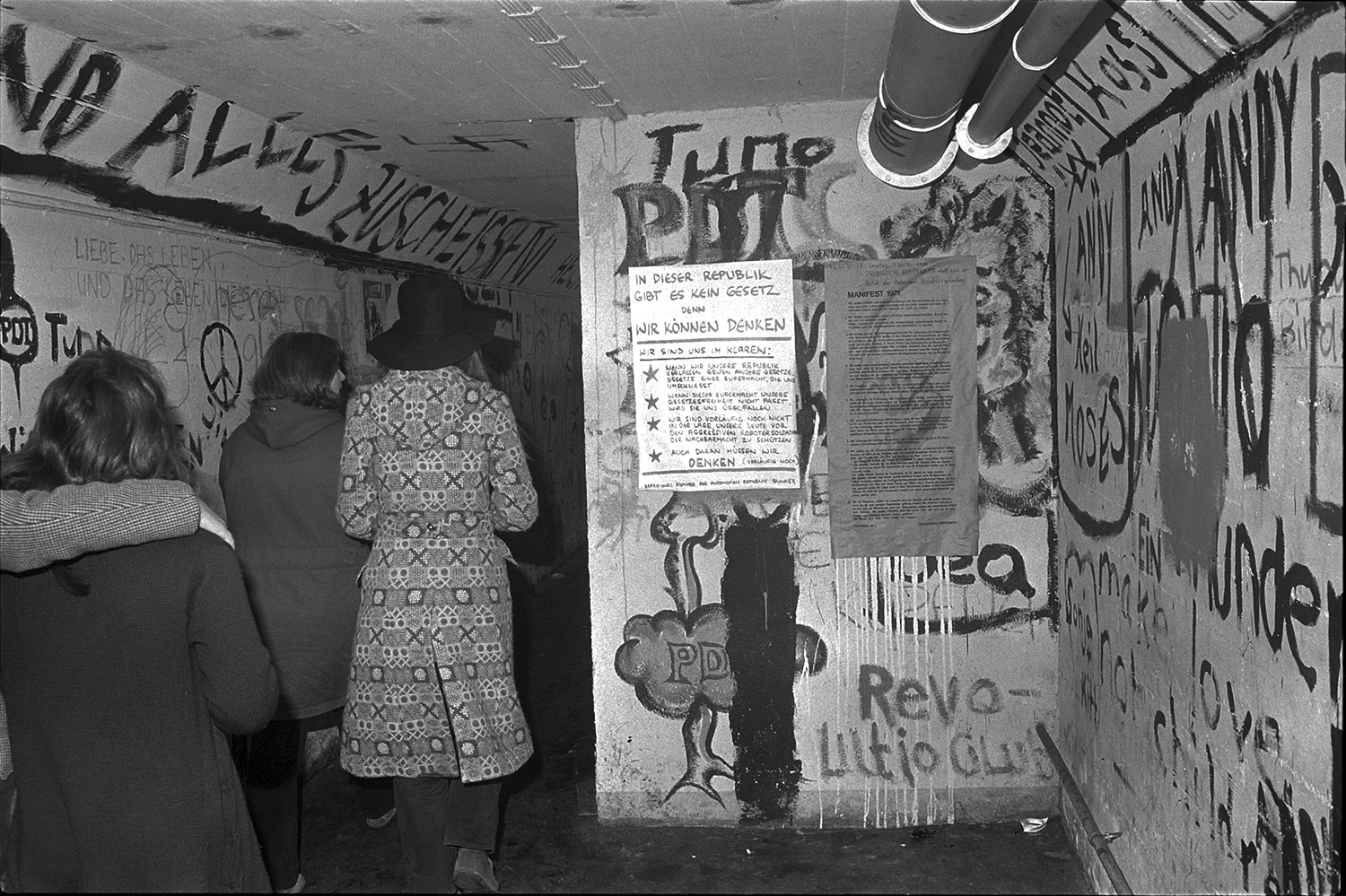 A graffiti-covered bunker is seen in Zürich in 1971. Blick/RDB/ullstein bild via Getty Images

In Europe, bunker-building is practically as old as the airplane. While World War I saw only limited bombing, new technologies like incendiary bombs—used by Allied forces to shocking effect in Dresden, Germany, and across Japan—were deployed in World War II to terrorize citizens and break their resolve. Governments in the United Kingdom, Germany, and elsewhere responded with so-called civil defense: the organization of society to ensure the resilience of civilian life in war.

Civil defense involved planning for evacuations from major cities, training civilians to douse firebombs, and developing mass propaganda instructing the public in emergency preparedness. It also included extensive public bunker building programs, first in Germany and then across Europe. At the war’s end, when the Iron Curtain was built and strategists prepared for a conflict between the Soviet Union and the West, governments poured millions of dollars into building vast subterranean citadels, such as the United Kingdom’s Central Government War Headquarters in Wiltshire, England.

“There are sleeping quarters, an industrial kitchen, an underground lake, BBC broadcasting facilities, a library with every document and map required to reconstitute the U.K. government,” said Bradley Garrett, a geographer and bunker explorer at University College Dublin and author of Bunker: Building for the End Times. “I have never in my life seen anything like that.”

While governments were building better bunkers, they were also developing more powerful bombs. And in 1954, civil defense was forever transformed by the first public test of the hydrogen bomb—a weapon with 1,000 times the power of the bomb dropped on Hiroshima, Japan—by the United States in the Marshall Islands. Not to be outdone, by 1961, the Soviets had unveiled their own megabomb, Tsar Bomba, which was nearly four times stronger than the U.S. variant.

“There was this realization in the United Kingdom that as a nuclear power, they would probably receive an attack with everything the Soviets had,” Farboel said. “So after the development of the thermonuclear bomb, … they actually sort of gave up on civil defense.”

Instead of building bunkers, Britain advised citizens to hide under stairs or block their windows with books—while investing ever-greater sums into their own nuclear weapons. By 1968, according to Historic England’s Wayne Cocroft, much of Britain’s civil defense infrastructure had been put under “care and maintenance”—effectively, sealed and retired.

But in Europe’s nonaligned and nonnuclear states, the view was quite different. Although retreating to Alpine fortresses was the preferred method of deterrence in Switzerland as early as 1880, the country did not introduce a requirement for new homes to be built with personal fallout shelters until 1963, well after the development of thermonuclear weapons. Silvia Berger Ziauddin, a Swiss cultural historian at the University of Bern, said this was partly because studies on the long-term impacts of nuclear fallout were not shared with non-NATO countries.

In the decades since, Switzerland has become world renowned for its bunker technology—the bunker representing somewhat of a national ideology of defense for the neutral state.

“The bunker was kind of conceptualized as … an island for the Swiss family, the nuclear family … as the democratic ‘cell,’” Berger Ziauddin said. As well as their symbolism, home bunkers came with “ritualized” state guidelines for cleaning and maintenance, which, she argued in a 2016 paper, served to create “docile, calm Cold War subjects.”

Vast public bunker networks in Scandinavia were likewise seen as symbols of collective strength. “Civil defense was always seen as an act of solidarity,” Farboel said. In a small country like Denmark with limited space to flee, authorities adopted the view that “there would always be someone to save.” 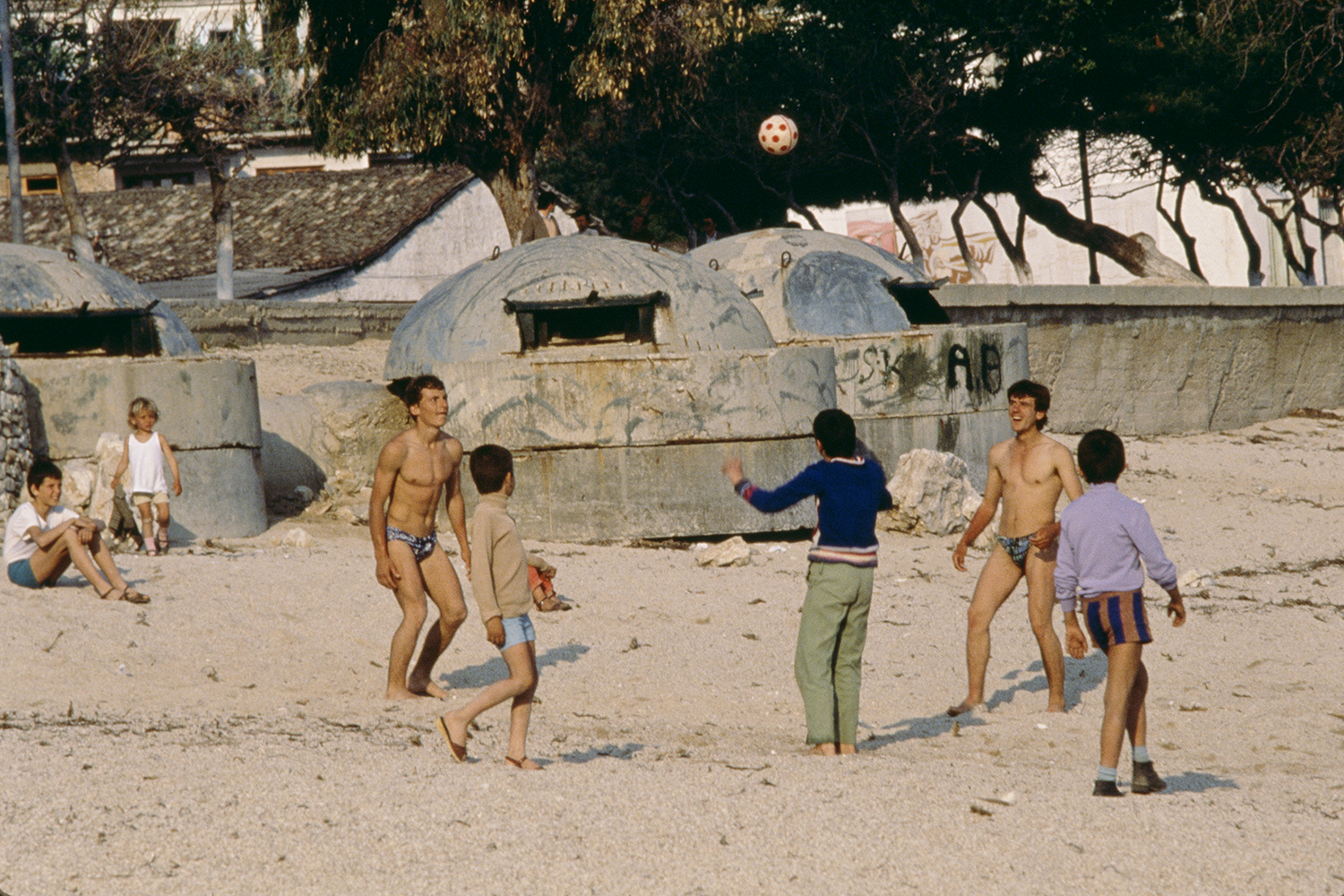 Bunkers like those seen here in June 1988 are still a ubiquitous sight in Albania. John van Hasselt/Sygma via Getty Images

“These shelters were to keep everyone prepared in the event of an invasion—but also to remind people that they could be invaded,” said Emily Glass, a British archeologist and bunker researcher. This constant feeling of threat, Glass writes, helped justify the suppression of would-be uprisings and fueled the “xenophobic nationalism” that characterized Hoxha’s rule.

Yet the reality of nuclear war—and the limitations of bunkers in enduring one—could not be ignored forever. Already in 1966, the acclaimed docudrama The War Game portrayed the likely outcome of nuclear war in a manner that the BBC deemed “too horrifying for the medium of broadcasting.” By the 1980s, it was widely known that nuclear war would result in a devastating “nuclear winter” that could extinguish much of life on Earth. Bunker advocates soon faced the problem of the “14th day,” when the worst effects of such a fallout would have passed and survivors would need to emerge from their bunkers to reconstitute a society.

“The fundamental function of a bunker is resurrection. You’re not meant to stay down there,” Garrett said. “What you do when you come out of the bunker is the hardest problem to solve.” 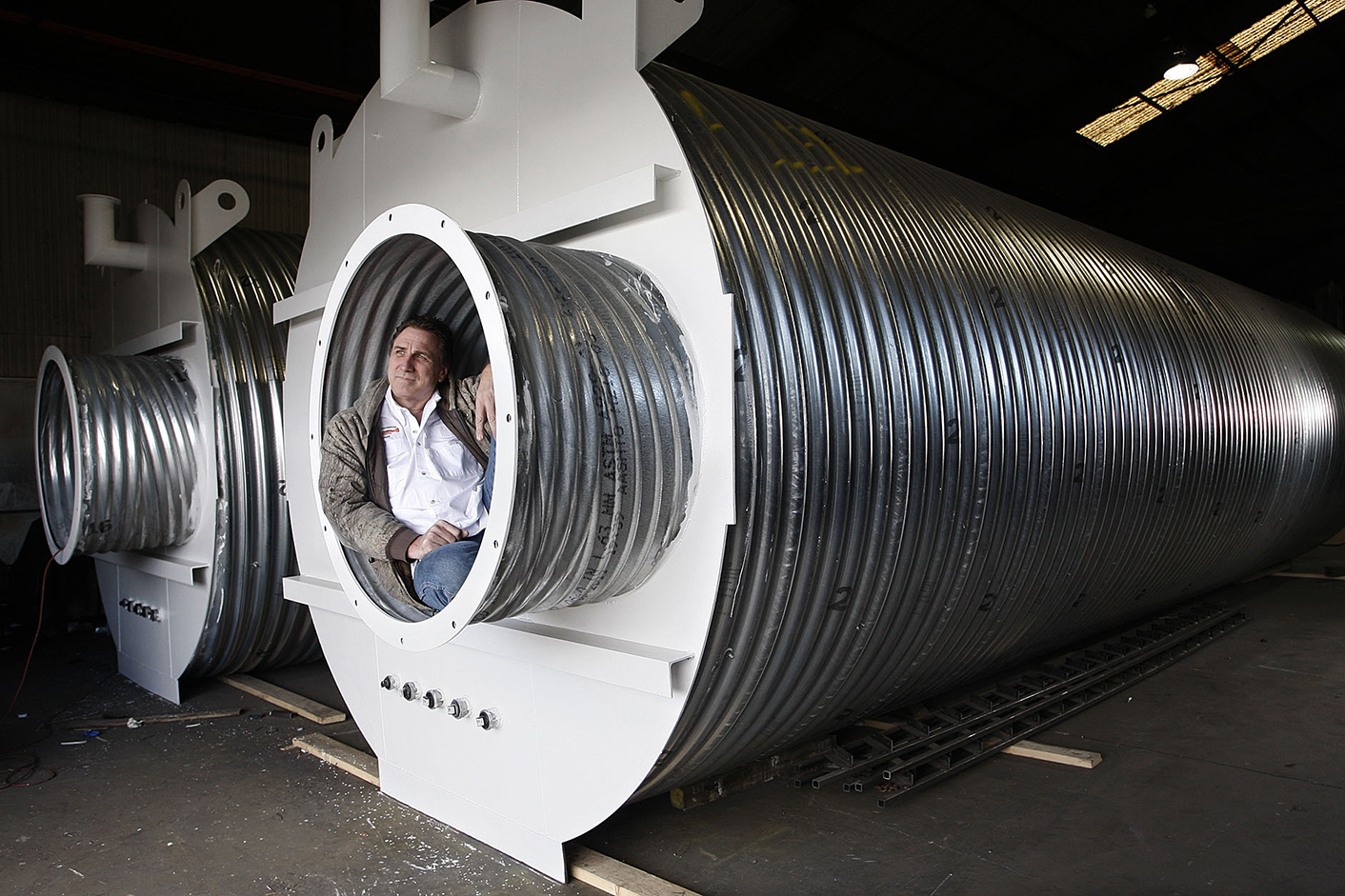 Ron Hubbard, president and CEO of Atlas Survival Shelters, sits in the escape tunnel of a corrugated pipe bomb shelter that Hubbard’s company assembles at his small plant in Montebello, California, on Jan. 10, 2013. 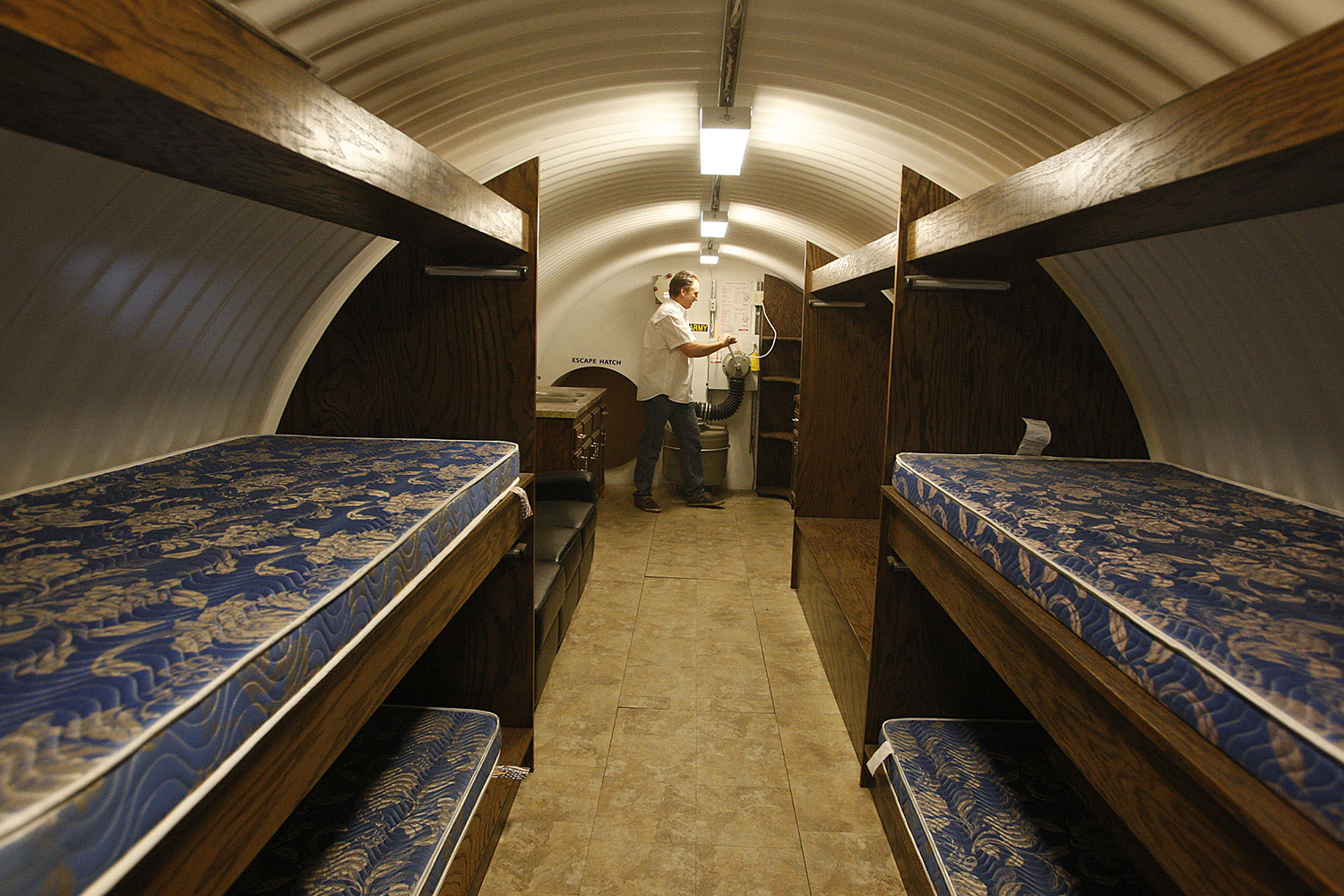 Hubbard demonstrates how to manually pump air if electricity ever stopped working into a bomb shelter with five beds, which Hubbard’s company assembles at its small plant in Montebello, California, on Jan. 10, 2013. Gary Friedman/Los Angeles Times via Getty Images

Today, bunker-building in Europe has largely become a private concern. Backyard bunker companies like France’s Artemis Protection and the United Kingdom’s Subterranean Spaces have reported an explosion of interest since the start of Russia’s war in Ukraine. Across the Atlantic Ocean, the U.S.-based Atlas Survival Shelters has experienced the same phenomenon.

“I think from the first day that [war] kicked off in Ukraine there, my phones were ringing,” said Charles Hardman, director of Subterranean Spaces. “Everyone was getting really frightened.”

Luxury bunkers like Hardman’s run into the hundreds of thousands of dollars. For those with even more to spend, companies like Vivos Underground Survival Shelters sell space in former German and U.S. government facilities for millions of dollars.

That more people are looking for options is a reflection of widespread anxiety. In the past few months, global Google searches for “bunker” and “nuclear war” have spiked dramatically. According to Gallup, some three-quarters of Europeans fear being embroiled in a wider conflict with Russia. Across Europe, the belief that Russia will use nuclear weapons is widespread, held by some 25 percent of Romanians to more than 80 percent of Irish. On May 1, Russian television broadcast a simulation of nuclear strikes hitting the United Kingdom and Ireland.

Countries like Denmark, Sweden, and Switzerland—which all lay claim to vast public bunker networks—have at various points in the last two decades tried to determine exactly what state their civil defenses are in. As in Germany, the United Kingdom, and elsewhere, many bunkers have been sealed since the Cold War or converted into museums for a curious public.

Zora Schelbert guides tours at the vast public Sonnenberg bunker outside Lucerne, Switzerland. “I’ve been getting calls from people asking me, ‘Can you please tell me where I would have to go if the war in Ukraine gets closer?’” she said. 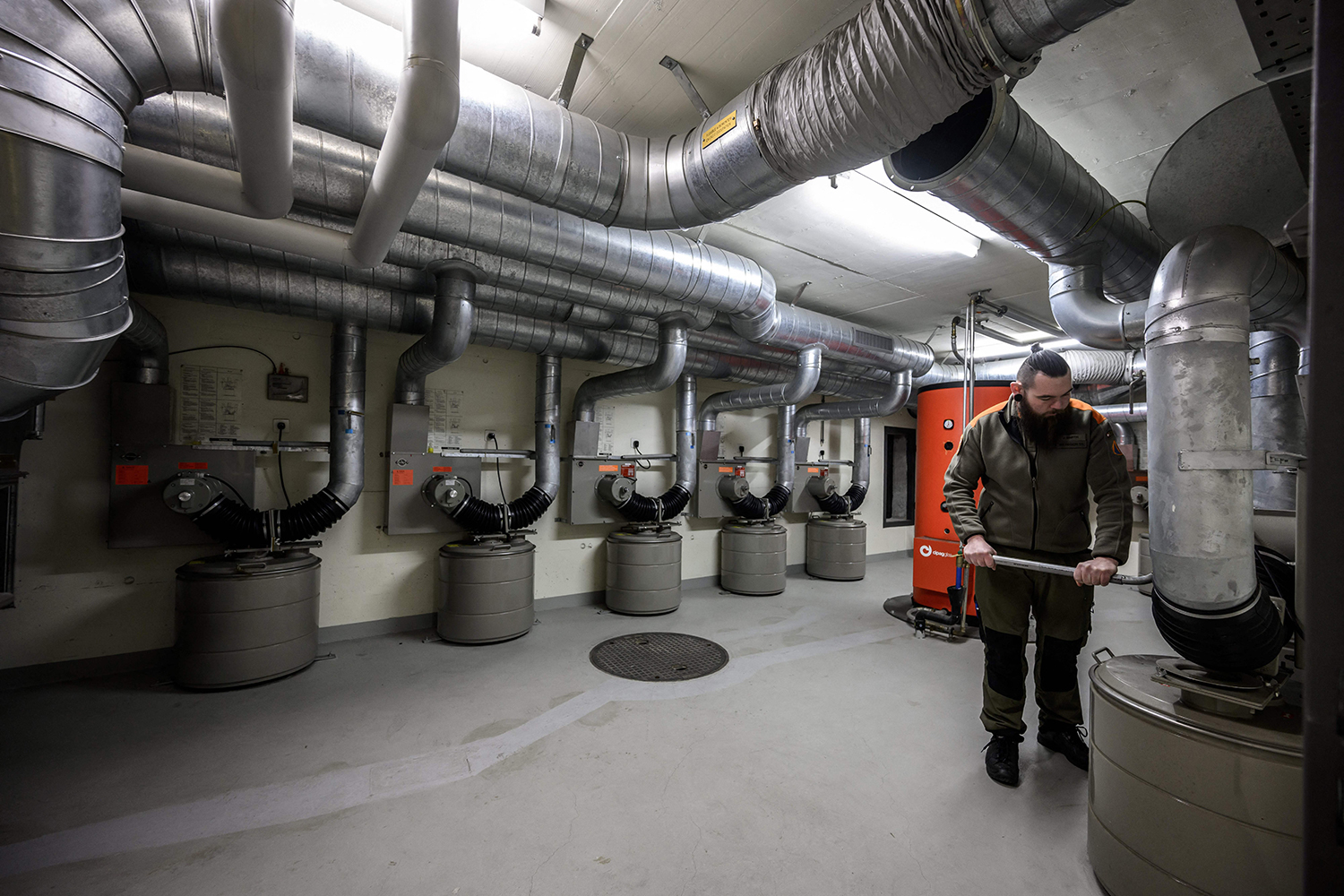 An officer of the Swiss Civil Defence shows the ventilation room of a public concrete nuclear fallout shelter in the village of Evionnaz, western Switzerland, on March 28. Russia’s invasion of Ukraine has awakened long-slumbering anxiety interest in Switzerland in concrete nuclear fallout shelters built across the country during the Cold War, with spots available for every single resident. FABRICE COFFRINI/AFP via Getty Images

“Those shelters are part of our history,” Schelbert added. “But I’ve never really thought of them becoming an actual plan B.”

For years, various Swiss officials have been pushing to ease the 1963 law requiring most family homes to include bunkers, recognizing both their high construction costs and the existing surplus of bunker space in the country. Since the early 2000s, they’ve also been downsizing large public shelters like Sonnenberg. Now, when Schelbert puts her home address into a government site to locate her nearest shelter, it tells her there are none available.

Elsewhere, civil defense still plays a major role in defense policy. Both Sweden and Finland, now considering NATO membership, carry on traditions of civil defense that originated due to their nonalignment. Finland famously stockpiled medical supplies and survival gear in its own government bunker well before the COVID-19 pandemic.

Sweden has been similarly proactive. In 2014, after Russia invaded Crimea, Sweden’s civil defense authority issued a recommendation to resume the construction of bunkers. In 2018, it issued brochures with advice on how to survive the first stages of a conventional war to all civilians. (Citizens were asked to plan and stockpile for just a few days of interrupted electricity, water, or communications.) 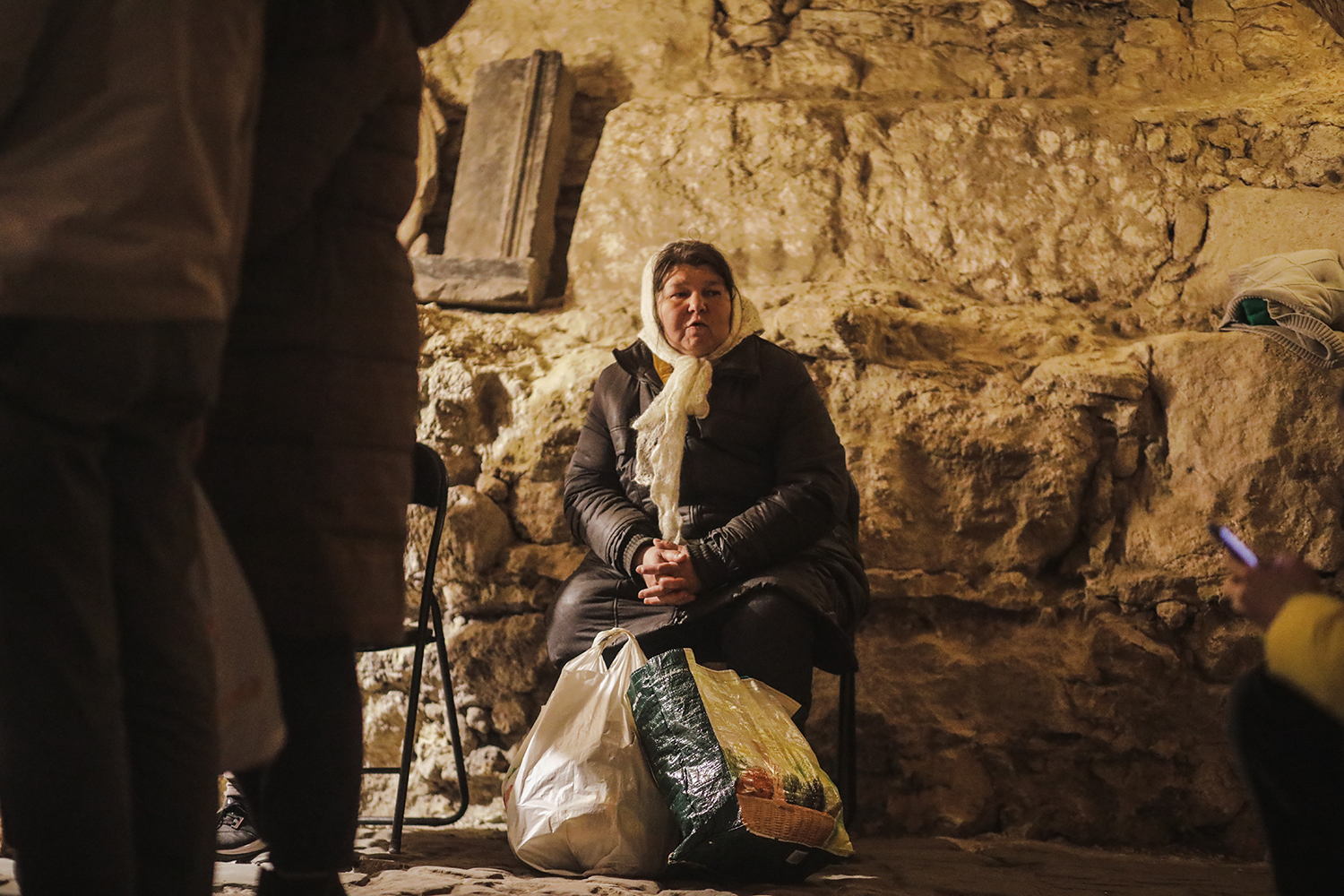 People take refuge in a bomb shelter during an air raid alert while a group of musicians perform in an effort to comfort people displaced from war zones in Lviv, Ukraine, on April 20. Gian Marco Benedetto/Anadolu Agency via Getty Images

Given the severity of nuclear conflict, most civil defense experts advocate informing citizens of basic survival techniques rather than building expansive bunker systems. Farboel said the Swedish approach was “clever” because it encouraged planning at a time of multiple crises when none felt threatening.

NATO member Denmark, by contrast, “would be left without a clue as to how to handle this,” she said—and any attempts to inform them now “would be read into the context of a potential war.”

One consequence of the end of the Cold War, Farboel argued, is the loss of the public’s mental preparedness—and stamina—for war.

Today, she said, “we’ve forgotten it entirely. … We’re not really ready for it mentally.”