Shares of Innovative Industrial Properties (NYSE: IIPR), a marijuana real estate investment trust (REIT), have taken a dive this year, falling with the rest of the marijuana sector. Investors have generally turned away from unprofitable growth stocks, which sums up most of the cannabis industry. In fact, after some initial excitement over marijuana stocks when Canada made recreational use legal, investors have shifted their attention elsewhere and stock valuations have fallen almost across the board in the cannabis sector.

Innovative Industrial Properties (IIP) is profitable, but it depends on marijuana growers to rent its grow houses, so the company would be in jeopardy if the industry collapses.

According to data from S&P Global Market Intelligence, the stock was down 58% through the first half of the year. As you can see from the chart below, the stock has declined over most of the year. 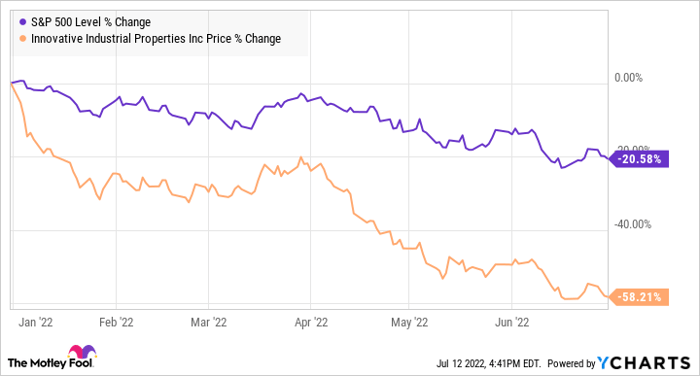 IIP fell sharply out of the gate in 2022 as an operations update that included the acquisition of 29 new properties was not enough to impress investors. The stock lost 15% in its first three sessions of the year.

Shares of the marijuana REIT stabilized at the end of the month, and in its fourth-quarter report in late February, the company posted revenue growth of 59% to $58.9 million. Earnings per share increased from $0.91 to $1.14, and adjusted funds from operations (AFFO), which is generally considered to be a better measure of performance for REITs than earnings per share, rose from $1.30 to $1.85.

In April, the stock fell as the company first announced a secondary offering of 1.6 million shares and then got hit by a short-seller attack later in the month. Blue Orca called IIP an “inflated cannabis bank” and said there was an “imminent risk of default” from IIP’s largest tenant. In its response, IIP accused Blue Orca of spreading disinformation and said it didn’t understand its business. Nonetheless, the stock fell 7% on the news.

The stock still fell on the news and drifted lower again in June.

Based on its current numbers, IIP looks like a bargain. The stock is trading at a price-to-earnings ratio of just 23 and it offers a dividend yield above 6%.

Growth and income are a rare combination in the stock market, and IIP’s prospects continue to look bright as more states legalize pot. With the stock down more than 50% this year, now looks like a great time to pick up some shares.

10 stocks we like better than Innovative Industrial Properties
When our award-winning analyst team has a stock tip, it can pay to listen. After all, the newsletter they have run for over a decade, Motley Fool Stock Advisor, has tripled the market.*

They just revealed what they believe are the ten best stocks for investors to buy right now… and Innovative Industrial Properties wasn’t one of them! That’s right — they think these 10 stocks are even better buys.